So my 500SL came with a rare dark blue interior color (color code 132), love it or hate it it's certainly unique. It was only used in the r129 chassis from 1990-1993, and was then discontinued. Since it wasn't that popular an interior color choice to begin with, and original Blue parts are at best 17 years old, finding replacement interior pieces in the correct color is a daunting task to say the least.

One of the little things wrong with the interior of my car was the little pieces that are at the top of the door panel, behind the mirror were falling apart. The original vinyl had delaminated from the backer, due to heat exposure and shrinkage. The driver's side had also had all the clips broken (Some mechanic had done quite a number on the driver's door in general, performing a shoddy power window regulator replacement). That piece would end up in your lap if you shut the door too hard.

Mercedes made the same body style r129 SL up to the 2001 model year, so there are plenty of good, used serviceable parts out there, however very few in the proper color, so after trying aimlessly to find these parts in blue, I opted for the closest match possible, black, figuring it would stand out the least.
In all reality the black pieces didn't look THAT bad and were ok in the interior, but the perfectionist in me was constantly annoyed by them, so I decided that I would seek out a solution, and decided to use a color vinyl dye to try to match the pieces.

After searching around local parts warehouses, I was able to locate VHT Dark Blue satin color dye. The color was close at least according to what the cap looked like, so I figured why not give it a try.

Here are the black pieces before spraying began. I cleaned them by wiping them down with some 70% isopropyl alcohol and allowing them to dry thoroughly. 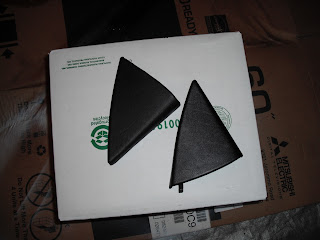 This is the VHT Vinyl color dye I used 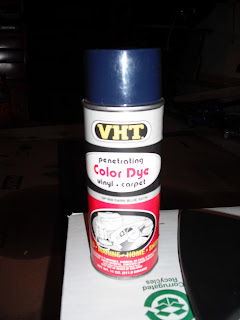 After shaking the can well for a couple minutes I sprayed on the first coat. I immediately realized that this stuff is much thicker and had a much denser pigment than conventional spray paint. Here are the pieces after the first coat was sprayed. 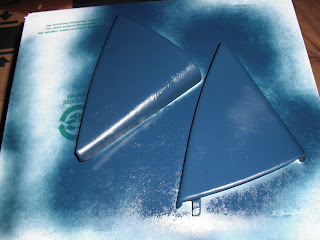 You can see by the overspray how dense this stuff is. I sprayed a second coat just to ensure complete and even coverage, although the first coat pretty much did the trick. Here they are after the second coat: 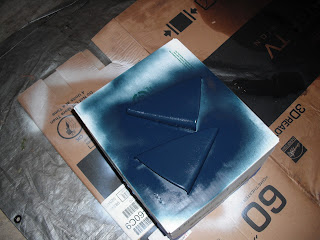 The glossyness dissapears as they dry. This stuff has a pretty strong odor, but works really well. I recommend if you do use it, you use it in a well ventilated area. I did this inside my garage with both bay doors open, and you could still smell it several hours later. I allowed the parts to dry for 24 hours, then I installed them back in the car. Here is a picture of the passenger door panel with the piece back in place. 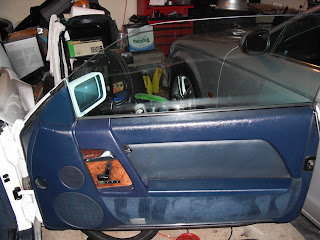 The color match is 90% perfect, only up close can you really see any sort of distinction, but having a seam there, it blends into the interior very well, and especially with the door closed, I don't think many people would realize that this part came from the factory in a different color originally. I'm satisfied.
Posted by George Androulakis at 3:59 PM 2 comments: Okay, so one of the main detriments of this car was that the leather seat upholstery was all but destroyed. The drivers side was much worse than the passenger side, and I actually ended up putting gorilla tape on the seat, just to keep it together.

So I knew that I had to get the seats reupholstered. Everyone advised against doing it myself, saying that it was next to impossible and that I would never get it to work. Well, I love doing things myself and I'm kind of stubborn so I decided to do it myself anyway. I found a seller on ebay named diamondmall, who sells pre sewn replacement seat covers for the Mercedes R129, as well as several other cars. So I decided to give it a shot... after all how hard could be??

Here a a couple Before Pics: 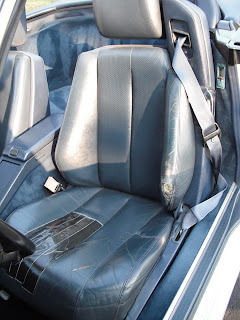 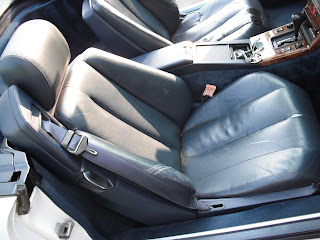 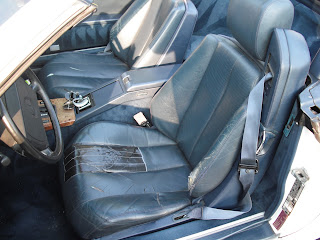 Things you need to know: 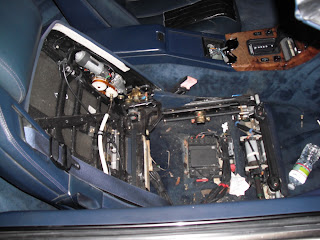 The plastic clips holding the seat back to the metal frame are easy. Just pry them off with a small screwdriver.

What's a huge pain are the 3 metal rods - which provide the pleats in the seats. They are in a cloth channel sewn into the bottom of the cover, and clip to another rod on the seat frame. Along the bottom there is a fiber channel that fits into grooves - use a pick or screwdriver to pry it out. This is how the entire bottom of the seat is held on along the edges as well. Getting them off is ridiculous, and you have to remove the horsehair / foam pad from the metal frame - it's just a friction fit there. Mine were completely rusted and two of them were in fact broken. I had to improvise at this point and cut up good old metal coat hangers, and used them as my new rods. This worked fine.

Then you have to feed the rods into the new seat skin, cut notches in the appropriate places, - hint - feed zip ties up the holes so you can mark the cover, then replace the white plastic clips and clip the rods down to the pad. Start in the middle, then do the two sides, then stretch the leather over the bolsters. On my car I had to add a bit of foam on the bolsters because 20 years of wear had kind of compacted it. It took me 8 hours or so to do the 4 seat cushions over two nights. The bottoms seem easier than the backs, but in reality they aren't - getting those fiber channels in there is a pain - Hint - start with the front corners and work backwards on the bottoms, if your corners dont perfectly line up, you want it to be on the back of the seat where it's tucked under, not where it's visible in the front.

Here are some pics during the process: 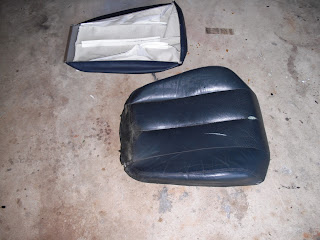 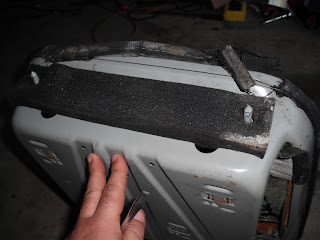 My Fiber channel was all but falling apart... 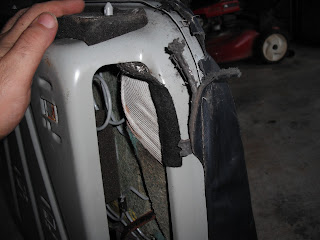 Another shot of removing the fiber channel 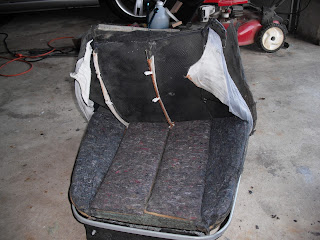 Pulling the old skin off the seat. You can see the rods, and the clips that hold the "pleats" into place. You can also see the rust. 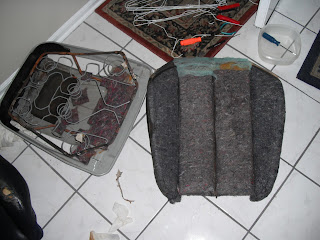 Once you have the old skin off the seat, pull the horsehair and foam pad off the metal seat frame. It's just a friction fit, no fasteners but its a bit tough to get off. Also either wear gloves, or BE CAREFUL, some of those under seat parts are very sharp, and mine were a bit rusty. I have the cuts to prove it!! You can see all of my seat springs are completely intact however. 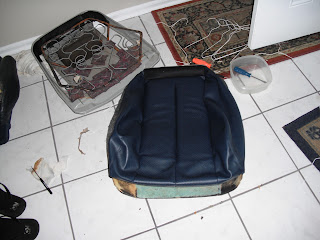 This is after the 3 rods have been installed and clipped down. You now see the pleats made by the rods. At this point the seat may show a few wrinkles. Don't worry about trying to get it perfect right now. Next step is attach the horsehair pad - with the new leather back to the metal frame. 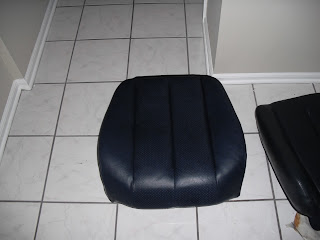 Here's the finished product. Now I didn't take pics of the next step but here is what you have to do. Flip the seat over once you have reattached the horsehair pad. First thing I would do is flip the fiber channels over so they are in the the proper position to go back in the channel. This will all make sense if you have taken the original skin off. Slowly pull the leather to get it close. I would start with the front edge, it's the hardest by far to get in, but the rest kind of falls into place once you do that. then do the sides, and lastly do the rear, so that if one corner doesn't line up perfectly, it wont show when the seat is reassembled in the car.
The backs of the seats are similar, except for a few things. The sides and top of the seat are held onto the metal frames by large plastic pieces that clip onto it. - pry them off slowly with a screwdriver. Only across the bottom of the seat is the same fiber channel. The center rods creating the pleats are exactly the same, and the clips are the same. The corner on the side that is notched for the seatbelt / headrest mount has a few staples but they are clearly visible, use a small screwdriver and a needle nose plier to remove them. I used a standard 5/8" staple gun into the horsehair pad to hold that corner down.

Here's a pic of the skin removed from the back and of the one problem I ran into, and sort of solved. 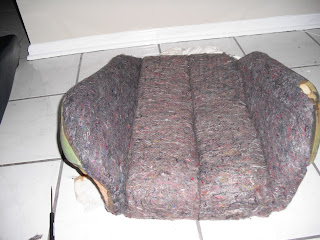 As you can see, the bolsters have shown wear. You need to add foam to them - not as much as you think, or you will have a gap there where the piece is missing. I used foam from and old chairs seat cushion, and attached it down with gorilla tape, you may need to pull the side bolsters on and off a few times to get that part right. Here's a pic of my finished product. - The wrinkles in it will come out with steam and use.  Once they are mounted in the car, I used a home steamer to iron out the skin a bit. There are still a few wrinkles in it. But nothing that looks bad. 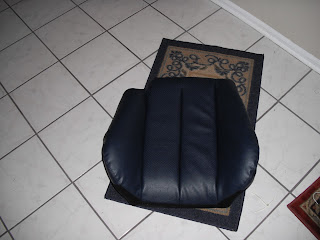 Now you have to repeat the process for the other side, and then reinstall them in the car. It's been raining for two days, so I haven't really managed to take good AFTER pics, but the car looks a million times better. I didn't do the headrests for now, I do have the covers but the original leather was fine, and is almost a 100% match, so i decided that I didn't want to get into all that and left them as they were. 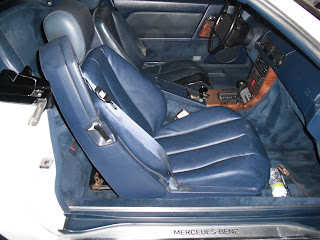 This is an an after picture, In my garage before bolting the seat down or steaming it. 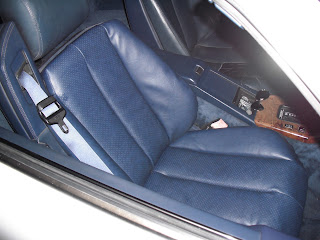 I hope this guide helps people, and that you realize it's not as hard as you thought. There are some tips and tricks, and although my install isn't 100% perfect,  its 95% and I'm extremely pleased with the results. Especially considering what I started with. I will get some good after pics once the weather clears up.
Posted by George Androulakis at 9:59 AM 4 comments:

Not much to report during the week. Been busy with work and repainting my house.
The car passed NJ state inspection with flying colors on Tuesday, so it's good till August 2012 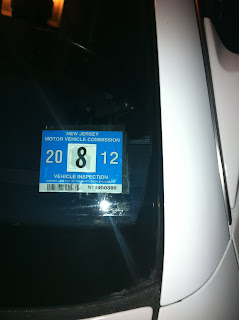 I'm picking up an infinity basslink powered 10" sub off of craigslist for $40 this evening, and I think I'm going to work on the sound system this weekend.

More to come....
Posted by George Androulakis at 6:29 AM No comments: