So one of the worse things about my 500sl has been the paint. It was REALLY dull. The car sat for 8 years, most of it outside before I got it. There were spots where the car was just covered in dirt. I didn't really do much besides wash it last year. It's OK from 20ft away but kind of dull and lifeless compared to a modern car.

One of my neighbors and good friends (who is also a car guy) has gotten into detailing. He has an 18 year old son who has really gotten into it, and purchased a Porter Cable random orbital buffer. He's been bugging me to have a go at the SL. While he's a good and really nice kid, I was always a bit skeptical about letting him loose on the car with something that could so easily damage the paint. Finally his dad vouched for him, and was like, let him do the hardtop... If it doesn't work out or if he hurts it I'll get it take care of. So I agreed.

Him and his dad came over and we washed the car, and then he started...

All I have to say is WOW... he made a believer out of me real quick.

He used Meguiars ultimate compound on an orange pad.

This is as he started... 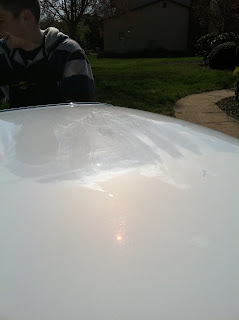 You can see the difference already.... 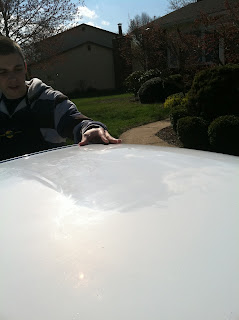 This is with the roof about halfway done.. The before and after is amazing. It looks like the paint is wet as compared to flat. 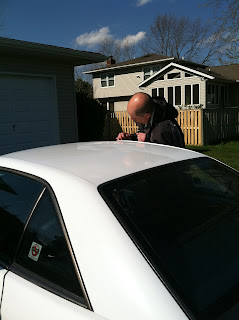 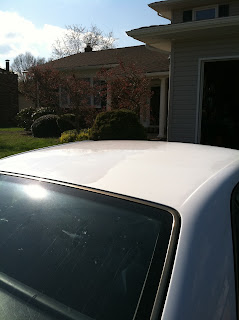 The results are hard to capture in a picture, but amazing in person. He ended up doing the whole hardtop for me, first with the compound and then with two coats of Meguiars cleaner wax.
The hardtop is hopefully coming off this evening when another friend brings over the storage cart and cover I purchased from him.
I went from being skeptical about the buffer to looking forward to when we can do the whole car... More to come!!
Posted by George Androulakis at 7:56 AM