Ok, another one of the things that really annoyed me about my car was that the "doors" or folding covers for my sunvisors were missing. Inevitably these all break, especially in r129s that sit in the sun with the top off. The plastic is brittle, and little pieces crack off. 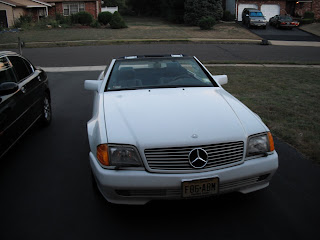 You can see the exposed mirrors / lights in this pic above.

Now, finding R129 sun visors in good condition is a task in itself, especially considering my interior color. They are also VERY expensive, because of their rarity (over $150 per side). So I decided to think outside the box on these, and while searching ebay, found a set of w126 visors, in the right interior color. I ended up winning them for $12.50 + postage.

Initially I was ambitious enough to think that I could just transplant the inserts, and that all would be well. Well I came to realize that although close, the inserts are slightly larger than those used on the r129, and that they would not work. Initially I was going to call it a loss and put the w126 visors on the forums to try to recoup my expenditure. Then I started thinking about it, and decided that I really didn't need the $12.50 that badly and I was willing to experiment. Note: w124's, w201's and w126's use the same visor insert so those visors are plentiful and cheap.

My criteria for this procedure was as follows.

- Nothing irreversible could be done to the r129 visors, because of the off chance that one day I find the right inserts for the right price.
- The finished product had to be cosmetically acceptable, and look like something factory
- I didn't care if the lighted mirrors worked or not, since they didn't work now, and I personally don't see much of a need for them. (Women please don't shoot me).

So I set off trying to see what could be done. First I removed the visors from my car. Here is a picture of the visor removed. 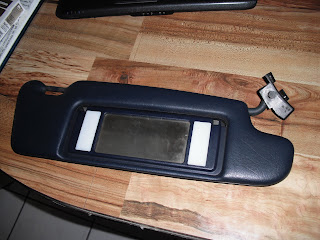 As you can see the visor door had broken off. First step, pry the mirror and light cover off - it's just a press fit. Then you will see this: 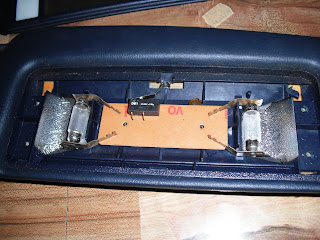 Note: In this picture the 6 #1 phillps head screws attaching this internal assembly to the actual visor have already been removed. You will also probably find bits of broken plastic that were the remnants of why your original doors broke off.
Once you remove those screws pull this assembly off and you will see the base of the r129 visor. 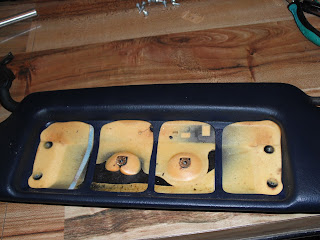 You can see the 6 screw holes in this visor. I then proceeded to remove just the door off of one of the w126 visors - note: you have to remove the mirror / light cover piece from the w126 visor 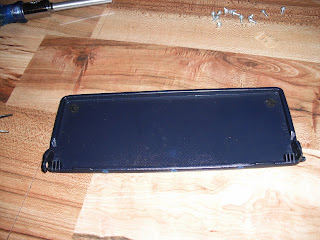 Here is a pic of the door removed.
Now the first thing I did was lay the door over the r129 visor to see if this was even a viable possibility. 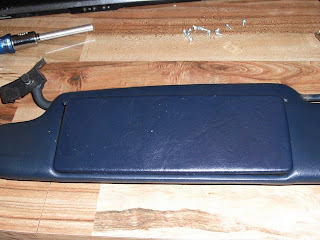 As you can see, with the innards removed, the door is almost a perfect fit. Now the key to this is those two little pegs the w126 visor uses to hinge with. They are visible in the above pic. What you need to do is CAREFULLY drill two holes in the sides of the r129 visor for those pegs to fit into. that way the w126 door will now be hinged on the r129 visor. The other thing you need to do is trim the inside plastic of the w126 door, so that it will allow it to fully fold and close. This will make sense when you do this. So what I did, is mark the locations of the pegs with a pencil, and carefully drilled two holes with a 7/64" drill bit. Then, and this is the scary part, you have to get the pegs into your newly created holes. The visor door is hard plastic, but it WILL flex, you won't break it. Once you do that, close the w126 door, trimming the inside plastic as necessary to get it to sit flush.
Here is a picture of the finished product: 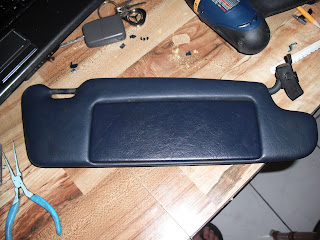 The visor door actually does hinge up and down, although it a bit tight of a press fit when closed, however there are no internals, if one were to hinge the visor door upwards all you would see is the foam inserts. However if you were to remove this visor door, you could reinsert the r129 pieces, and have no visible traces of these doors being on there. Sure I lost the mirrors, but for $12.50, this makes the car look much more presentable than exposed mirrors. 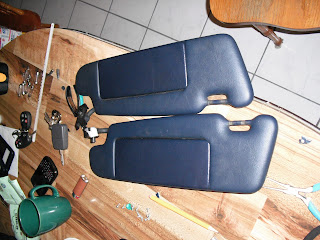 Here is a pic of both the visors done and ready to be reinstalled in the car.
Posted by George Androulakis at 3:24 PM